June has been all sweat and dust. The rains passed over our heads, and the skies barely spat until the 20th, when the heavens opened, giving us veg growers at Forty Hall’s summer solstice celebration two good reasons to party hard. Our very soils – so longingly crafted into a rich stitchwork of life through seams of organic matter and careful cultivation – revert to dust or baked rock, primordial states. It’s hard to establish crops in these conditions, even with the wonderful warmth. The planting is slowed down and we have to speed up to redress the balance. When God evicted Adam and Eve from Eden with the memorable line, “In the sweat of thy face shalt thou eat thy bread”, it wasn’t a mere quip: he meant it, man.

Don’t take this the wrong way though: these are great days on the community market garden, classic midsummer. It’s a buzz being part of a team that succeeds in clearing, weeding, forking over, mulching, levelling, planting out and covering a long bed of Black Kale, in time for tea, as we did on Wednesday. Perhaps it’s one of the ancient buzzes, that those of us who nowadays run half marathons or set off on epic journeys are out to recreate. Whatever, the tea tastes good afterward. Needing it gives it the flavour.

A few weeks ago on the radio I heard the Francophile reporter Graeme Fife reporting from the Transhumance in the Pyrenees. It’s the day in the year when the shepherds and goat farmers agree that the warmth has arrived, and begin, as one, their great summer migration from the deep valleys up up up the steep mountainside to the lush pastures in the clouds:

“When did you set out?” he asks one shepherd.
“Seven this morning”
“A long day, you must be tired”
“Toujours fatigue, jamais fatigue”.

Always tired, never tired. Having a baby this year has only accentuated that sensation of spending the lighter months feeling totally knackered and fully alive. Like Clare says, it’s because we don’t tire of it. Not the gentle breeze on our faces nor the spinning kaleidoscope of leaves; nor the cameraderie that comes with sowing seeds alongside someone; nor the exquisite produce that pours forth from our sweat and dust mixed with muck and magic. If you’re tired of London’s finest food, you’re tired of life.

Asparagus spears green and tender picked not a day ago; the unique salad bag with twenty plus varieties of leaf sprinkled with edible flower petals; broad beans popped from the pod and strawberries raised outdoors solely on soil and rainwater like so few are nowadays. You could say that though we’re poor we eat like kings, though this would be an understatement: our fayre is much richer than the rich’s. For, like peasants, gardeners and those who are on a level with their grower the world over, our solidaristic relationship with the land, its plants, animals and people, gives our simple vegetables a significance, a wholeness, that can neither be bought nor seized. A significance, a wholeness, the lack of which leaves a gnawing hunger in the gut, that can neither be named nor sated.
Glutinous and gnawed, they come at us for more, yet more, with their cuts, their austerity measures, their enclosures. They come on many fronts, but there are many ways to resist. Remembering that we have a wealth and power and dignity that cannot be taken is one way. 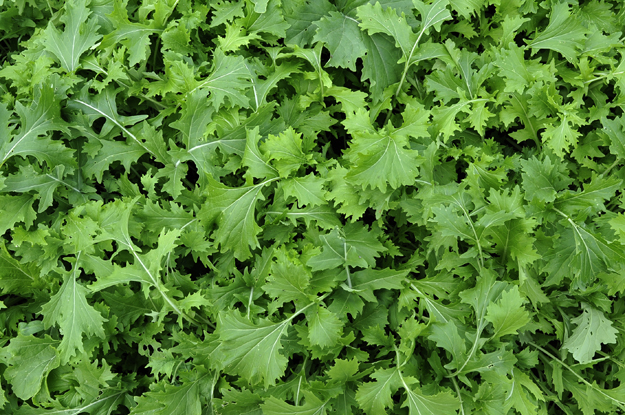 Last balmy Wednesday, in one of those accidental perfect circles, Reece and Martin began planting out the Black Kale “Nero di Milano” on the Entrance Field, at the precise moment that Ed, Grace, Jacqui and Nava started pulling up the skeleton frames of last year’s, to make way for the next course of the rotation. In the One Big Rotation, this week we start covering the Old Kitchen Garden in Cavallo Nero, Kohl Rabi, Winter Radish, for this is the Year of the Brassica, once only this decade. Brassicas, the Cabbage family, those vital, mineral-rich leafy greens grown and known the world over as “the medicine of the poor”. This is the year we get better. 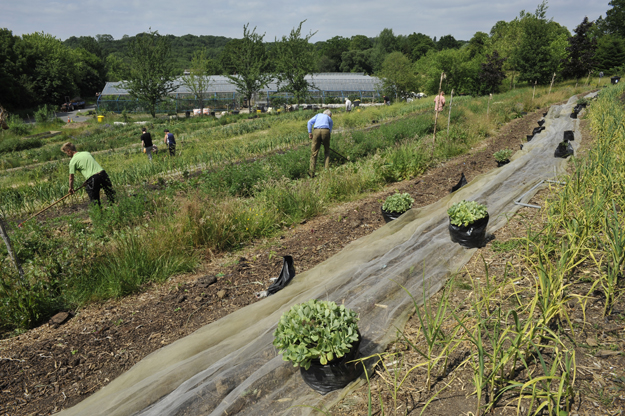 And they’re off! The garden has updated its status to “In Full Swing”. On the days our watering cans and compost bays are half empty, this means our beds lie a mess of winning weeds; when they’re half full, the crops advance to the foreground, brimming with vitality and the promise of imminent abundance: this is the best place to be.
For the last six weeks on Tuesdays and Fridays, salads, fresh herbs, rhubarb and asparagus have filled the crates that have filled the crater that is the Harvest Dispatch zone of the warehouse. The tomatoes have green fruits already; the squash have gone out, their crazy tendril-driven aventure launched; and red-ripe strawberries will arrive in a few more hours of pure bright sunlight. In the Old Kitchen Garden, it will be the Year of the Brassicas: Martin and I spent the last day of the last dry spell rotavating out strips for these in the clover/ trefoil/ nettle sward. It leaves it looking like a land of green mohicans, an effect not expected but one I’m quite pleased with. Punk never died: its DIY ethos has had a lasting impact on alternative culture, I don’t believe OrganicLea would have happened without it…
…Which would have made my days in May quite a bit less blustering but irrevocably less beautiful. At this time, running alongside the garden’s fulsome To Do List of sowing, potting up, planting out, earthing up, weed crisis management, not panicking and reassuring each other, we have our season of plant sales, which account for roughly one-third of our propagation work. It’s an extra burden to be lifted lightly, for there’s something magic about plant stalls. On a couple of Wednesday afternoons I’ve glimpsed a great huddle around the plant sales trolley, bubble-wrapped in the kind of hushed reverence normally reserved for new-born babies or priceless antiques. Loading the fragile pots of life onto our electric float for delivery into the heart of the borough, I feel like something akin to a horticultural Securicor Man. Like the veg that joins them, only more so, these plants have an extraordinary journey ahead of them: They will be dispersed across gardens, allotments, grow-bags in yards and window boxes on balconies; many will become a symbolic totem of summer, many will make the hard cityscape practically yield.

And here’s the thing: in our late capitalist society, for the most part people are no longer being asked to produce anything, but rather seek precarious employment and housing at the whim of an inflated, nebulous financial “industry”. Yet, contrary to what the architects and preachers of this system dictate, the peasant mode of production is not extinct, but experiencing a renaissance, as Jojo Tulloh, author of The Modern Peasant, outlined in the annual Spring Lecture at our last Open Day. In London today, as many people are involved in subsistence or small-scale food growing and preparation as ever: the Way Back to The Garden remains well trod.
Our little tomato plants are Way Markers. Bless them. 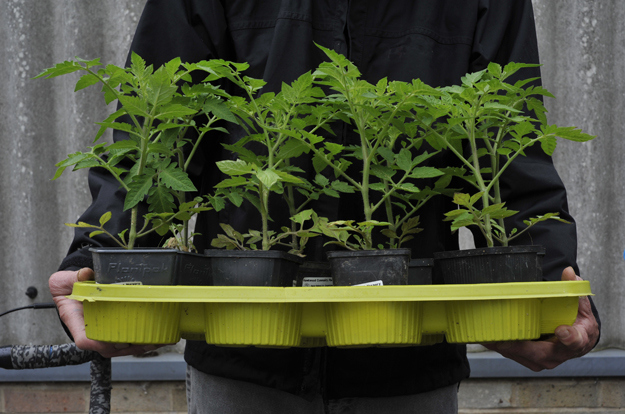 Graduating from the Nursery – tomato plants off to a good home, 31st May 02015. Photo: Martin Slavin